Submit your name and email address below and you’ll receive the Self- Assessment along with free articles, tips, and resources once or twice a month that address the essential attitudes and perspectives you need to be an effective facilitator, trainer, or group leader.

My first summer home from college, I secured a job with a pear-packing plant in an adjacent town. The job involved a lot of variety. On any given day, I might be finishing metal parts in the machine shop, repairing fruit bins, doing light carpentry, general cleaning, etc.

Then one fine day, out of the blue, the boss strolled up to me with an assortment of brooms and a dustpan. This was the big boss of the whole plant I might add. Big John Bar was his name. He was a huge hulk of a man, with a brusque temperament that didn’t entertain pleasantries. For me, he was intimidation incarnate.

He handed me the brooms and said, “I want you to sweep out the factory.” I looked around at this huge factory that was maybe 50,000 square feet, blanketed with conveyers, movers, shakers, and contraptions of every conceivable type, all bolted to the dirt and dust-covered floor.

I nervously replied, afraid I already knew the answer, “Which part of the factory?” Hoping against hope that this question would have some relevance.  He replied with the response I had most feared, “All of it!”  I reluctantly took the tools and slowly began to survey what seemed like an impossible job of endless drudgery for a restless 19-year-old home for the summer.

I seriously considered quitting at this point, but something inside prompted me to at least give this a try. So, I began pushing the broom. Stroke after endless stroke…stooping under machinery…clearing the debris…sweeping it into my dustpan…dumping dirt into the garbage can…hour after hour…day after day…sweeping and sweeping…nothing but sweeping…only sweeping. Just the broom and I in an endless…mindless…dance.

I’m not sure when it happened, but somewhere around the second or third solid day of sweeping, something began to shift inside me. I was still sweeping the same way but I think I stopped judging what I was doing and just did it. In the midst of the simple and mindless act of sweeping, my mind came to rest. It became clearer than ever and began to reflect on my life. It began to see my place in the world…my relationship to my parents, my sibling, my friends, my desires, my memories, my actions. Thoughts and experiences all seemed to flow past in a continuous panorama of insights and healing. I actually began to experience a sense of peace, followed by joy.

As coworkers walked by on their way to their next task, heads down, serious and unhappy looking, I found myself smiling big and yelling, “Good morning Jim! “How’s it going Ralph? What are you up to today John?” I think people were a bit confused in the midst of this “miserable” job I was assigned.

That job took an entire week to do. Five days, eight hours a day of nothing but sweeping. In reality, five days was probably quite fast considering the scope of the job. Big John was even a little surprised when I returned to him with brooms in hand and smiling said, “All done!” To which he replied, “Already?”

I think that once I began to embrace the job, I noticed that I became very efficient and focused. And I could tell he was happy with how I handled it. I think it was a bit of a test. What may have been a test for him actually turned into a “quest” for me. One that I would have never undertaken voluntarily. And one, the gifts of which, I would never have been able to anticipate.

Relevance: Stories of “What Is”

Story-telling–is an ancient art that feeds the hungry soul. While facilitators tend to be viewed as authority figures, even if only subconsciously, it can be valuable to your group to dissolve these potential misconceptions with mild doses of reality from time to time. Telling a personal story that is relevant to the topic at hand, can be a fun, informative, and interesting way to move your group. While at the same time, introducing your humanity more fully, increasing participants’ trust in you.

Practice: Elements of a good story.

– Stories relating personal experiences are best for engendering trust.
– Stories should be succinct and interesting.
– Stories may contain some deeper message or meaning.
– Stories told well have an emotional commitment from the storyteller.
– Stories should relate to what you’re trying to do as a group and should ideally move the group forward.
– The story should not be used to avoid or dance around what’s up for the group.
– The story should not involve anyone who would take offense to it being told publicly.

Join us IN PERSON for an experience like none other. A leadership program that will Transform the way you work and live.

This isn't just a training, it's a whole new way to experience the world!
This 5-Day Group Leadership Experience will leave you more-
•   Confident…Find your power and realize your potential
•   Connected...Tap into a strong, supportive network of peers
•   Clear...See to the bottom of complex challenges
October 4-8, 2021

We are YOUR Group Leadership Solution!

This site uses Akismet to reduce spam. Learn how your comment data is processed. 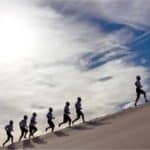